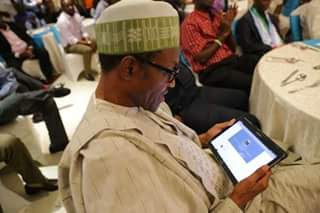 Corruption, The Economy, Security - these were President Buhari's keywords as he campaigned against incumbent President Goodluck Jonathan. And he has kept his word, plunging straight into fighting corruption and tackling insecurity impressively. Boko Haram, who were already being swept out as Goodluck was nearing the end of his tenure, are being cleaned out presently. The fight against corruption hugs news headlines daily since Buhari became president - howbeit with appearance of going after easy victims.

The Economy, as he was rightly informed by experts earlier on, has been his nightmare. He had made loud-mouthed promises that even sounded like 'exchange rate: 1naira = 1dollar'. His spokesmen have energetically debunked claims the man made such a statement. Probably because World Economy is what it is: 'beyond a Nigerian politician's pay grade'. And Buhari realized it late; when the campaign adverts expired. Well, now, the man, Nigeria's finance minister, has an energy-sapping problem in his hands: 'China are devaluing their currency.'

Currency devaluations from Kazakhstan to China are heaping pressure on African central banks to relinquish control of their exchange rates as they run down reserves faster than any other region. From Nigeria to Uganda, African policy makers are burning through their foreign reserves and tightening monetary policy to prop up their currencies. Thursday’s move by Kazakhstan, central Asia’s largest crude exporter, to abandon its currency peg has intensified speculation that authorities in Africa will devalue or halt intervening in their foreign-exchange markets.

“I’m sure African central banks are watching avidly what’s happened in Kazakhstan,” Yvonne Mhango, an economist at Renaissance Capital in Johannesburg, said by phone on Thursday. “It puts increasing pressure on them, especially Angola and Nigeria. Investors are already expecting devaluations in Nigeria and Angola. This just heightens those expectations.”

African central banks from South Africa to Kenya have been taking aggressive action this year to bolster their currencies, concerned with inflationary pressure emanating from rising import costs. Commodity-dependent nations such as Zambia and Ghana are struggling to cope with currency declines of more than 20 percent against the dollar since January.

Half of the 20 countries that have lost the most reserves as a proportion of the total in the past year are from Africa, according to data compiled by Bloomberg. Nigeria’s reserves have dropped 20 percent to $31.6 billion in the past year, Angola’s are down 16 percent, while Kenya’s slumped 14 percent since January.

“Some countries just don’t have the level of reserves to use that frequently and it’s a very costly exercise,” Nema Ramkhelawan-Bhana, an economist at Rand Merchant Bank, a unit of Africa’s biggest lender, FirstRand Ltd., said by phone from Johannesburg. “We are going to see a lot of tightening of monetary and financial conditions across these African countries.”
The move by Kazakhstan, which caused the tenge to plunge as much as 24 percent against the dollar, followed China’s depreciation of the yuan last week and Vietnam’s third devaluation this year of the dong on Wednesday. Russia stopped managing the ruble in November.
Nigeria and Angola, Africa’s biggest oil producers, have held off on weakening their currencies in recent months despite Brent crude prices falling almost a fifth this year to below $50 a barrel. 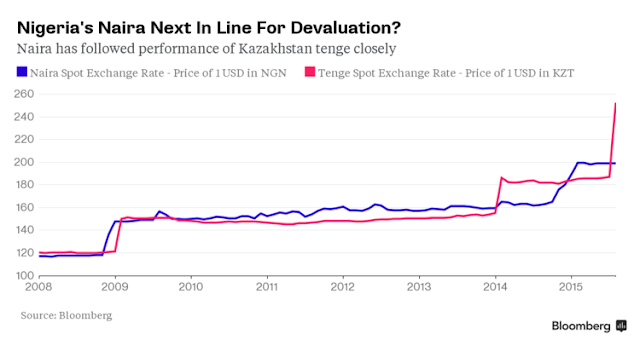 Nigeria’s naira may be lowered by 15 percent to 20 percent against the dollar following the action by Kazakhstan, according to Mhango. The currencies of the two nations have tracked each other closely since both were devalued within 10 weeks of each other in 2008-09, she said.

The Central Bank of Nigeria said it has no plans to ease its rules or devalue.
“We haven’t seen any reason so far to institute a change in the foreign-exchange policies,” Ugochukwu Okoroafor, a spokesman for the bank, said by phone from Abuja, the capital. Genuine demand for foreign exchange will be met by the central bank, “but once it comes as a result of speculation, we’ll fight back,” he said.

The naira slid 0.4 percent to 199.05 per dollar at 2 p.m. on Friday in Lagos, the commercial capital. It has been mostly flat since the start of March after the central bank stopped banks from trading the currency without matching orders from customers. Forward prices indicate it will fall to 236.5 in six months and 261 in a year.

A slowdown in China, Africa’s biggest trading partner, will make it harder for the continent’s central banks to prop up their currencies, said Albert Essien, chief executive officer of Ecobank Transnational Inc, which operates in 36 African countries, more than any other lender.
“I don’t think that most of them can hold their currencies by just intervening,” Essien said in an interview with Bloomberg TV. “With China softening up, with China devaluing, it has some implications for Africa.”