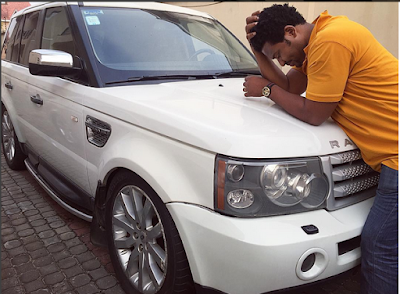 He’s arguably Nigeria’s most successful gospel artiste sinc e this century began. Only fellow Christ Embassy lead singer Sinach probably surpasses his followership base. With several continental and national awards and nominations, however, Frank remains number one. Naij Music refers to him as “Nigeria’s hottest gospel music artist ever”. Well, the world is just realizing his worth; but there was someone who saw potential when he started out 5 years ago and that is Ezekiel ‘Ezzy’ T.

Ezzy T was, according to Frank, already a career musician. When he learnt Frank was about to launch out, Ezzy decided to drop his ambition and serve Frank, as manager and assistant. At the time, Frank says he had nothing but the ability to feed himself and – we add – the superstar potential. Ezzy saw well and invested early.

Well, the Rock Town boss was going to give his Range Rover 2012 and Mercedes to his parents as an end-of-year present when, according to him God  reminded  him of someone “who abandoned his music career 5 years ago to work with me... and has put in so much effort serving. Many people mocked him saying "why are you working for this small boy?" but he put in even more effort! Well now you have seen what small boys do.  I decided to let him have this and get something new for papa!”

And “this” is the clean white Range Rover 2012 Ezzy is overwhelmed with in the photo.

The Story of Linda Ikeji