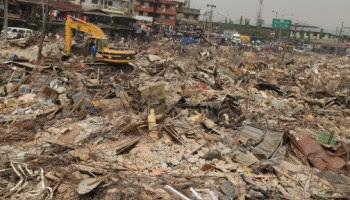 Last week, headline news was the demolition of the Oshodi market. The event was followed by vehement reactions from the traders who mostly are of Igbo origin which immediately led to accusations of anti-tribal retribution against the government of Akinwunmi Ambode who was famously voted against by Lagosians of Igbo origin. A top Lagosian-Igbo opinion leader writes, however to counter those sentiments.

In his piece titled 'The truth about Owonifari Market demotion at Oshodi', Joe Igbokwe seeks to explain the unsaid about the much documented demolition, drumming up support for the Ambode administration's infrastructure policy, at the risk of drawing widespread condemnation from his kinsmen.

Read the full text below:
"
The Holy Book says you shall know the truth and the truth shall set you free. I have heard a lot of outpouring of emotions about the demolition of OSHODI Market by the LAGOS State Government led by His Excellency Mr Akinwunmi Ambode last week. I heard Ohaneze, l heard CD South East, and l heard some Igbo groups in Lagos.
The summary is that Gov Ambode has declared war on Igbo Traders in Lagos because they did not vote for him in the last elections. Now the truth must be told: Former Gov FASHOLA had planned to evacuate that market right inside the Oshodi Roundabout loop since 2007 when he came into office. The location of that market was not only an eyesore, but mindsore, mouthsore and head sore. A committee was set up to plan a relocation. I was in that committee and Mr Ben Akabueze was also in that committee. We held several meetings at Oshodi Isolo Local Govt With the market leaders. A lot of politics , mistrust , blackmail and ethnicity played itself out on where to take the market to. Gov FASHOLA stopped the committee and forged ahead to secure a place at ISOPAKODOWO Market now called OSHODI Resettlement Market.
This new market has been there for years and these traders refused to relocate. FASHOLA left office without moving the market even though he cleared the bigger problem and the bigger mess called Oshodi. But the plan to relocate the market has been in the front burner. AMBODE moved in last week to do the needful when all the avenues of dialogue which have been going on in the last 8 years failed to yield positive results.

A Similar case happened in Berger Auto dealers Market. For 8 years Gov FASHOLA tried to move that market to Mowe but the traders resisted it with every energy at their disposal. At a time an Igbo Patriot Engineer Mgbemena , former Federal Cotroller of Works in LAGOS offered to help broker the deal . Everything was going fine until one of the dealers headed to Court to secure and injunction to stop the relocation. Out of annoyance Gov FASHOLA said he will wait for the courts to decide knowing fully well that Berger Auto Market remains a bad advertisement on the way we do business . Businesses like that are not done on the highways anywhere in the world. I was in a meeting where Engr Mgbemena was apologizing to the governor for the misconduct of the Autor dealers in resisting change in a dynamic society like Lagos. He asked the Governor to give him another chance but did he succeed ? The rest is now history.
Now enter Ladipo Market. MUSHIN Local Government and the leadership of Ladipo Market Traders Association have agreed few years back to rebuild the market. They agreed they will do it in batches to minimize loses. A date was set aside for the construction to start but the traders were not ready to move. On a certain day the Contractor who incidentally is an IGBO young man moved in with his equipment and hell was le loose. He was losing money on borrowed funds. OHANEZE Ndigbo LAGOS went to town to address a press conference that IGBO Traders are being intimidated by the government of LAGOS State as a result of fallout of 2105 elections. Before you know it other Igbo groups went to town with their defeatism attitude. My self and other members of The Igbo Conscience (TIC) called a meeting with all the stakeholders. All the leaders of the Markets were there including the leadership of the Mushin LGA Led by the Executive Secretary and the Contractors. After weeks of high level engagements we set October 1st as the D day. The rest is now history. Go to Ladipo Market and see the modern Market standing like colossus with all the trappings of good thinking and good result. Commonsense even though it is not common worked. Intervention worked. Sound reasoning worked. Spirit of give and take worked.
Now our people must hear this: Lagos State government I know is working hard to change the face of Lagos and we must not resist change because the change is for the good of all and sundry. We must be wise enough to know when to shift ground for the good of the commonwealth. Defeatism attitude and persecution complex is not the way to go at a time like this. Igbo leaders in Lagos must help our traders to respect constituted authority in their own interest . I have lived in Lagos for close to 35 years and I serve LASG . I know enough realize that our people must change their attitude to live in peace with other Nigerians. I rest my case.
"