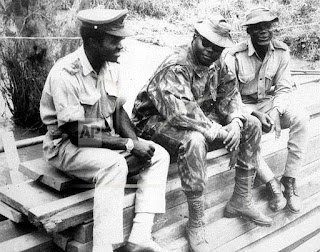 In 1967, Nigeria was at war. With Biafra. The Bafran army, goaded by their cause and motivational leadership was marching towards Lagos, the seat of power, conquering cities and states on their way. At about 100 miles from Lagos, Lieutenant Murtala Mohammed was dispatched by Yakubu Gowon, the Nigerian president, to halt the parade. He did it with surprising success. At the Murtala Muhammed 40th Memorial Lecture held last week at the Transcorp Hilton Hotel, Abuja, President Muhammadu Buhari brings the event back into memory.
President Buhari recalled that by the time 28 year old Murtala Mohammed was given Command during the Civil War, the Nigerians side was on the defensive under severe assault from the marauding Biafran army.

According to Buhari, the rebels had overrun the then Mid-West, and reached as far as Ore, just 100 miles from Lagos. But “By dint of sheer bravery, improvisation and resourcefulness, he mustered a rag-tag group of soldiers, integrated them into an entirely new division, knocked them into fighting shape, recovered Mid-West and ventured across the Niger. Alas, there were terrible casualties on both sides.

But Murtala’s motto was to get the job done as quickly as possible; sacrifice and loss were part of the risks of war.” He noted.
It was the Murtala division that routed the Biafran Army and expelled them from the Midwest Region. Murtala did not stop there; he moved up to cross the River Niger to join the Nigerian 1st Division which was on its way into Biafran held region from the north.
His campaign was not without accusations of war crimes, however, as he is reported to have supervised the killing of unarmed civilians in Asaba, in today’s Delta State.
Mohammed was killed on February 13th in a bloody coup in Lagos.
Africa Biafra Civil War Nigeria War Crimes