The organizers of the oncoming IBOM FASHION WEEK (IFW), a 3-day fashion and style event, have recently officially unveiled the project with the dates, participants, venue and activities announced. The theme of this year’s edition is tagged ‘Culture meets Style’ and is scheduled to hold from the 14th to the 16th of October 2016 within the premises of the Le Meridian Ibom Hotel & Golf Resort, Uyo. This was unveiled to press men at a recently held press chat.

According to the organizers, the IBOM FASHION WEEK is a well thought out event poised to put Akwa Ibom State on the fashion map with a 3-day epoch making string of events that will showcase up-to-trend fashion styles on a classic runway. The event provides a platform for young and emerging talents in the fashion industry to showcase their works and build connections with stakeholders, the media, investors and fashion lovers.

The Ibom Fashion Week 2016 is a new fashion event in Akwa Ibom State organized by Will Travel & Tourism in collaboration with Studio 115 Integrated Services and supported by Akwa Ibom State Ministry of Culture & Tourism.
Will Travel & Tourism is a company that strives to promote Nigeria’s arts & culture through tourism by leveraging our rich culture including entertainment to attract tourists and investments into the country.

It is a fashion industry event which will be attended by fashion media, fashion buyers and the lovers of fashion. Fashion designers, brands or “houses” will display their latest collections in runaway shows to buyers and the media.
It will be hosted in Akwa Ibom State for three (3) days, from October 14 – 16, 2016. The events shall be held at the prestigious Le’Meridien Ibom Hotel & Golf Resort, Uyo, Akwa Ibom State.
The event will help showcase, promote and advance the fashion & tourism industry of not just the host State, Akwa Ibom but also Nigeria as a whole. 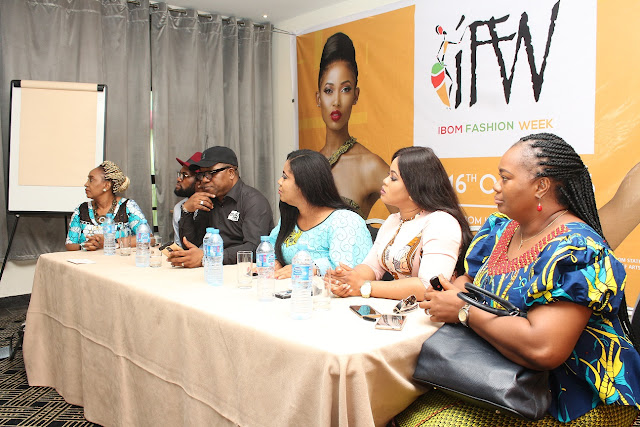 Speaking at the event, the president and founder of IBOM FASHION WEEK, Tonia C. Anaoji, said that “the event is aimed at bringing together fashion designers, makeup artistes and hair stylists in a bid to give leverage to what they do and encourage them to forge new frontiers in their career. We decided to bring this event to Akwa Ibom state because we believe the state is well positioned in the South South and South East as a place to reckon with. The peace that pervades the state and its stable security also are factors that made us believe we need to bring a world-class fashion experience to its residents.”

She pointed out that the event has been a burning passion within her and that with the help of some professionals inside and outside the state, the event is finally set to hold on the aforementioned dates.

Also speaking at the event, Mr. Elisha Attai, CEO of Studio 115 (partners of the event) and Vice president of Ibom Fashion Week, hinted that several A-list music artistes have been billed to give extra pomp to the event. He announced that the likes of Timi Dakolo, Adekunle Gold and Chidinma would be performing live at the event. He also divulged that the show would be hosted by Big Brother Africa’s Kevin, with the red carpet hosted by Uti and Denrele. AY was said to be one of the comedians scheduled for the show. Mr. Elisha also pointed out that several indigenous music and comedy artistes would be included on the list of performers as well.

“The list of performing artistes clearly shows that attendees are in for a swell time as we have ensured that we will bring some of the best and popular entertainment celebrities in Nigeria to blend with the runway  activities and ensure that they are thrilled with the IFW experience”, he said.

Three notable fashion designers in the state also spoke to press men announcing their full support for the event.

One of them, Mr. Aniekan Akpe, Creative Director of Aniferaz, said he supports the vision of Ibom fashion Week and welcomes it as a good development for designers and other stakeholders of the state. He also announced that he would make the attires that would be worn by the show’s compere’s and other officials.
Mrs. Ifiokobong of House of Bora, one of the speakers at the press chat, called out to young fashion designers in the state to take up slots slated for fashion designers in the state. She pointed out that registration and participation in the show is free for indigenous designers.

Mrs. Marietherese Enoh of Marie ‘T’ Couture and Welfare officer of FADAN (Fashion Designers Association of Nigeria)Uyo, said the association would work with the organizers of the event to ensure that it showcases the works of remarkable designers from the state. She also urged the media men and everyone that would be needed to make the event successful to join hands with the team to ensure it reaches the target audience and goes down as an epoch-making event for the year.

Rounding up, the President of IFW pointed out that the brand would train and groom promising designers in the state and send 5 outstanding ones to South Africa for professional training in fashion designing.

The Ibom Fashion Week is scheduled to hold from the 14th and run through to the 16th of October 2016 at the Le’ Meridian Ibom Hotel & Golf Resort, Uyo, Akwa Ibom state. More information can be found on www.ibomfashionweeklive.com.
Akwa Ibom fashion Press Release