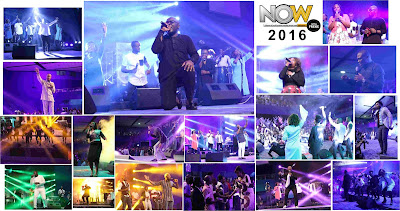 The 2nd edition of #NOW – Night of Worship – with Freke Umoh, held on Sunday November 6, 2016, at the Full Life Noah’s Ark Auditorium in Uyo. It was a world class live recording production, witnessed by 11,000 worshipers.
A project of Freke Umoh®, the #NOW concert project is an annual event that seeks to bring together worshipers from as far as possible into one arena for the purpose of praising and worshiping God without restraint, and to emerge with sound life decisions; personal resolves in relationship with God, and responsibility towards life on earth.
Fielding front-line African gospel artists, the likes of Samsong, Ada, Nosa, Afy Douglas, Eno Michael, and others like Eric Arubayi, Lawrence and De Covenant, Godfada, Progress, Shepherd’s Choir, the Unique Dance and Kaydee Numbere, the 2016 edition easily broke the attendance record of the first edition by about 3,000 worshipers.
A major target of the project was to capture praise and worship at its climax; and the atmosphere did not disappoint. A deafening spirit of praise and unsearchable depths of worship came together to yield an unforgettable experience for each one.
Planning #NOW 2016 was as intensive as it was extensive, involving professionals in diverse aspects of the event management, from Audio recording and Sound reinforcement, Concert lighting, Electricity, Public Relations and branding, music production, cinematography and more.
The quality of production was beyond excellent – as attested to by several attendees interviewed at different times, from set-up, through the event and afterwards. 2017 promises to exceed the attainment of the last 2 editions.
Planning for the 2017 edition has commenced, with management aiming to gather at least 25,000 worshipers into the Uyo Sports Stadium. Sparing too many details of the project, it is being prepared to be the International Debut of #NOW with Freke Umoh®, re-christened ‘the Uyo NOW Concert with Freke Umoh®’.
The convener, Freke Umoh has been clear on the fact that NOW is not just a night for multitudes to participate in gospel music. The vision of the project involves the birthing of conviction in the hearts of the participants. It is not just about the music and the artistic expressions that dominate the event atmosphere, but a moment for people to receive God’s help in courage to maximize whatever moments they find themselves in.
It is not just a Night of Worship, but significantly, also a Night of Decisions. Expect the 2017 edition to herald a #NOW revolution.
gospel music music