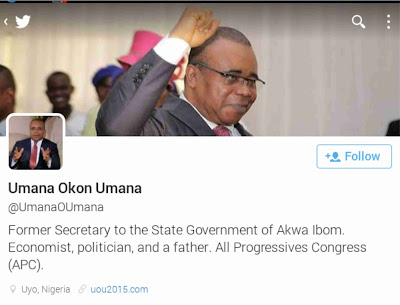 We don't break news at Jabborro, on this channel; we concentrate on researching and analysing straight news, in order to have meaty features. But we feel committed to people who read us, to air our opinion on this very news this early. The Akwa Ibom APC guber ticket is finally being threatened with revelations emerging few minutes ago concerning the news of their Governorship aspirant Mr Umana Umana's running mate, Mr Benedict E Ukpong, committing perjury by lying to Nigeria on oath, that he had resigned from his paid job, to run for election.

According to news broken by Thisday and carried immediately by, interestingly, J J Omojuwa, the same blogger alleged to have received cash to write against everything Pdp in Nigeria and Akwa Ibom, Mr. Ukpong has been collecting his monthly salary and allowances from his First Bank account from September 2014 to June 2015 as a staff of the Federal Capital Development Agency (FCDA).

Quoting Omojuwa; "Interested parties are already raising issues of constitutionality, morals and ethical matters against Effiong, who is also considered to have committed perjury, because he had told the world under oath, that he had fully resigned his employment with FCDA"

I had no personal grouse against APC until they commenced their hyperbolic publicity campaign of blackmail and lies against Pdp, a party that had all the resources, but chose to spend miserly (or imprudently) on publicity. It started with whipping up sentiments in their support and ended up painting political opponents in black - to shocking extremes of defamation; all the time presenting themselves as Nigeria's saviours. They succeeded in overthrowing the then ruling party, with public support. They were so popular all over the world that Akwa Ibom people had to keep reminding themselves of their heartbreaking stretch of history with Umana Umana to keep them from being carried along with the Apc spear campaign.

APC's offence is as follows: If they claim Pdp is corrupt, they have to exonerate themselves of corruption first, for Truth can never be established using Lies and you cannot be canonized by blackmailing another. On this note, Nigerians who are still awaiting actual CHANGE, should be hoping that Akwa Ibom APC will act sensibly and look inwards, away from public deception.