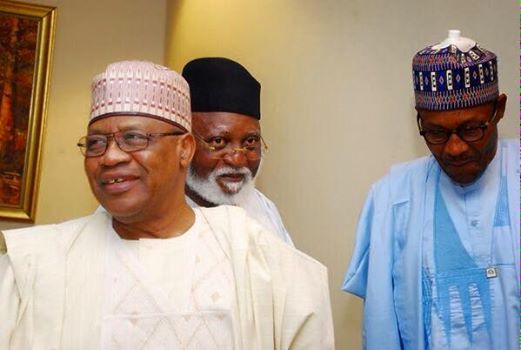 The commitment to rid Nigeria of corruption will be tested by how far and how well President Muhammadu Buhari handles the Halliburton bribery scandal which allegedly involved highly placed Nigerians described as sacred cows; Analysts have said.

President Buhari had declared in his inaugural speech that he belonged to nobody and stated his resolve to recover the nation’s stolen funds stashed away in several overseas bank accounts.
But Balarabe Musa, a former governor of the old Kaduna State, and chairperson, Conference of Nigerian Political Party (CNPP), said the President lacked the moral fibre to bring those involved in the Halliburton scandal to book.
A chieftain of the ruling All Progressive Congress (APC) in Edo State told BD SUNDAY that before the President left for a three-day official visit to the US, the White House made it clear that unless those involved in the American multinational scandal were prosecuted, part of the bribe money, about $140 million, recovered and still in the US, would not be repatriated to Nigeria, hence the President’s directive to security agencies to reopen investigations into the case.

In 2014, the US took control of more than $480 million siphoned away into banks around the world by Sani Abacha, the late Nigerian dictator, and his associates. Switzerland subsequently agreed to return some $380 million seized in Luxembourg in 2006, after a deal in which Nigeria accepted to drop a case against Abacha’s son, Mohammed.

The Halliburton bribery scandal, which dates back to 1994 when the Nigerian government launched ambitious plans to build the Bonny Island Natural Liquefied Gas Project (BINLGP), had revealed a network of secretive banks and offshore tax havens, used to funnel $182 million in bribes to Nigerian officials in exchange for $6 billion in engineering and construction work for an international consortium of companies that included a then Halliburton subsidiary.

While anti-corruption campaigners in the country have continued to call on authorities to identify and prosecute Nigerian citizens involved in the scandal, the late president Musa Umaru YarÁdau and his predecessor Goodluck Jonathan, lacked the courage to pursue the case either due to the calibre of citizens involved, or afraid that their own ‘dirty deals’ may also come to public light, some of the campaigners told BD SUNDAY.

Although, never publicly released, a 2010 Nigerian government document reportedly included three former Nigerian presidents, a vice-president, a minister, intelligence chiefs and corporate heavyweights in a list of bribery beneficiaries that was allegedly given to the officials by Jeffrey Tesler, a British lawyer who had since pleaded guilty in a London court for serving as the middle man between Halliburton and Nigerian officials.
Also in 2010, Nigeria indicted Dick Cheney, former US vice president, who was CEO of Halliburton before he was elected, only to later clear him when Halliburton worked out a $35 million settlement.
The ‘sacred cows’, who BD SUNDAY gathered were not happy with President Buhari’s visit to the US, have started gathering records which included documents linking the president and key allies and colleagues in his administration to major fraud-related cases in various affairs of the government and that the forces were ready to release shocking documents on the President, especially during his tenure as chairman of the Petroleum Trust Fund (PTF).
It was further gathered that the development was responsible for the recent press statement issued by Femi Adesina, presidential spokesperson that the President would not waste time in probing the administrations of Olusegun Obasanjo, Abdulsalami Abubakar, Sani Abacha, and Ibrahim Babangida.
But Balarabe Musa, a former governor of the old Kaduna State, and chairperson, Conference of Nigerian Political Party (CNPP), told BD SUNDAY in an interview that President Buhari does not possess the morality to prosecute those he termed “sacred cows” in the country who were all indicted in the Halliburton bribery scandal.

“I have told you before that there are sacred cows in Nigeria that Buhari lacked the morality to raise the rod on because the President himself is entangled. The Halliburton case involved all the past presidents and some states’ governors. So many of Nigeria’s leaders are involved”, he said.

He said the White House, which is reported to have given President Buhari a list of names involved in the bribery scandal, should stand their ground by insisting that the Buhari-led government do the right thing by prosecuting those indicted since the US authorities had sentenced Americans involved or forfeit both the repatriation of the recovered money and other supports.

“Buhari told us during election campaign that he will declare his assets publicly but when he became president he declared his assets secretly; and the media is silent about it. You can see the quality of leaders that we have in the country. The Americans are prepared to deal with thieves in their country. Americans involved in the Halliburton scandal had long been convicted,” he said.

Adeleye Adewole, chairman, Centre for Organisational and Professional Ethics (COPEAFRICA), told BD SUNDAY that it would be unfortunate and saddening, if President Buhari had promised to revisit the Halliburton scandal only to reverse himself days later by categorically naming past leaders whose regimes would not be probed by his government.

“If America is ready to support him to recover the stolen money down to the beginning of Nigeria, I don’t see any reason the President should not be courageous. I know he may not be able to do everything at the same time; but cases like Halliburton and Siemens are established corrupt practices that involved some past Nigerian leaders that Nigerians must not allow to be swept under the carpet. President Bahari does not have any option concerning these peculiar cases than to comply with the wishes of America.

“I see the fresh news as the handiworks of anti-corruption ‘Bourgeoisies’ who are corruption personified fighting back by turning the whole anti-corruption war into a blame game so that the new effort can be frustrated,” he alleged.
He said although some of the high profile corruption cases in the country took place before the immediate past administration, Nigerians needed to exercise a little more patience with the President in order to see the loots he is able to recover from the Jonathan administration before asking him to probe governments before it.
According to him, most past leaders in the country have the tradition of using ugly past of a sitting leader to hide theirs from coming to the public glare, through blackmailing antics, including threats to release incriminating documents of a present leader to the general public.

“We need to put a stop to all these types of nonsense. Buhari should be very decisive in his anti corruption crusade. If he is content with limiting his corruption war to the immediate past regime, so be it! If along the line, he comes across provable corruption cases that happened before the administration of Jonathan; even down to Obasanjo and Babangida’s regime, the president must be bold to go after such individuals no matter how highly placed they are in society. There is no expiration for criminal prosecution. The President must summon up courage to prosecute those involved in the Halliburton scandal,” he said.
Adewole, however, advised that Nigerians must be at alert to ensure that the gimmicks usually employed by corrupt individuals to halt war against corruption in the country would not work this time around by distinguishing between propaganda and real issues.

Babatunde Oluajo, public policy manager, Integrity, and former secretary, Zero Corruption Coalition, told BD SUNDAY that Nigerians should also know that in governance, all the challenges cannot be taken at the same time because it would result in total failure.

“In a situation like this, the President is going to come against those who think he is going to probe them or those who feel his policies are going to hunt their business. If you take on everybody at the same time, they will rally together to frustrate you. Nigerians need to be patient with him and give him the benefits of the doubt. Without even making any noise we have seen a number of things that have started to change. Let us give the President a full year before we can rate him in the so called war against corruption”, he noted.
According to him, Nigerians also needs to be careful with the U.S because it has its own permanent interest which the House White is protecting that may not be in the interest of the country.

“The US wants to continue to be in a position where it will continue to be the policeman of the world. I think Nigeria should be more concern with its own national strategic interest. Of course the U.S has promised to assist in recovering our stolen funds; but how do we go about it in such a way that it will not become the sole preoccupation of the government at the detriment of other critical sector of our economic that required attention! The question is: do you want to take on all the criminals at the same time? I think that is very impossible,” he said.

He further added that Nigeria would have been better if other regimes had had the courage to probe their predecessors and that former President Goodluck Jonathan lacked the probity to ask President Buhari to extend his probe beyond his (Jonathan) government.

“Was it Buhari that stopped Jonathan from probing Obasanjo? What he failed to do for whatever reason he now wants another president to do for him; just to make a case that he is not the only past president who is corrupt. Even the Halliburton and Siemens bribing scandals came to the fore during the tenure of Jonathan, what did he do about it? Because he is under fire, he is now saying ‘no be only me’; Jonathan is now pointing fingers,” he said rather furiously.