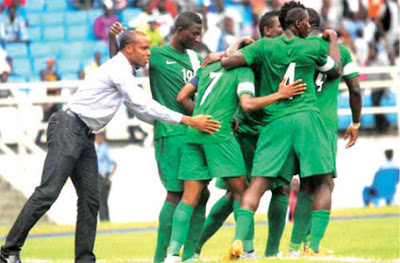 After the conflict in camp last week the Super Eagles, with Coach Oliseh's delicate fusion of youth with experience and clearly in better spirits, put up a much improved performance against an Indomitable Lions of Cameroun side equally undergoing a rebuilding phase. Matches between these two African giants have a history of controversy and eleven years after they last met, this one did not lack this recurrent decimal as the Camerounians played half the match without Captain Stephane Mbia who was sent off at the resumption of the second half.

News made the rounds that Vincent Enyeama was convinced to stay back in Belgium for the game. The goalkeeping department however looked very safe without him... for now.
Leon Balogun who, for me has not been entirely convincing at right back, was awesome on this night in Brussels as he led the backline from the centre with the calming influence it has been lacking to effectively defuse a below par Camerounian attack. His central-defensive partnership with Efe Ambrose looked impregnable and exceptional aerially, but vulnerabilities were still evident in occasional concentration loss (the Camerounians offside goal from an aerial duel, for instance) and poor communication (between Ambrose and Ikeme which almost resulted in an own goal), while wingbacks Shehu Abdullahi and Uwa Echiejile, were exposed on a number of occasions.

With help from the flanks, the midfield was impressive, but is still not linking effectively with the attack. The competition in the team (most probably) brought out the trojan in Ogenyi Onazi as he combined well with Mikel who continued from where he left off against Congo DR with another magnificent performance (and you wonder what happened to him at the last World Cup). Sylvester Igboun worked extremely hard and did a fair job of linking midfield with attack, underlining the need for a more natural player for the role of a support striker.
True to his nature, Rabiu Ibrahim struggled with the physicality and intensity of the game even as a substitute, while it was interesting to see the likes of Alex Iwobi and Wilfred Ndidi continue to bed into senior international football.

Moses Simon, in all his excusable exuberance, is gradually cementing a starting berth as he scored another beautiful goal - his second for the national team - and generally exemplifies the traditional winger: taking on defenders and supplying passes into the box for teammates. New captain, Ahmed Musa, unfortunately, did not exactly do as well. It will be interesting to see what happens when Victor Moses returns.
Emmanuel Emenike remains a threat to opposing defences, but laboured as always due to isolation in attack, over-ambition and indecision when with the ball. Sylvester Igboun and Odion Ighalo are, in contrast, more direct and decisive.

In all, I commend the team's character in brushing the camp debacle and the loss to Congo DR aside and bounce back in a matter of days with verve. The team's progress so far is also evident in the competitiveness therein, occasioned by availability of options. For instance, the team played very well even without a good number of "starters" as Godfrey Oboabona, Kenneth Omeruo, William Ekong, Kingsley Madu, Joel Obi, Obiora Nwankwo, Victor Moses and Aaron Samuel did not feature for a variety of reasons.

Kudos to the NFF, Coach Sunday Oliseh and the players for putting a smile back on the faces of Nigerians at the end of the international break. It is pertinent that we, the supporters, cynics
critics and onlookers alike, should be patient with the team and not expect such a domineering spectacle with every match at this rebuilding stage.
It is equally pertinent to remember that despite the victory, the Indomitable Lions still gave the Eagles a good fight even with a man down; more so, it was just a friendly. As the competitive games resume with a World Cup Qualifier (most likely against Swaziland) in November and an AFCON Qualifier Against Egypt in March next year, this performance should engender hunger for improvement and not complacency.