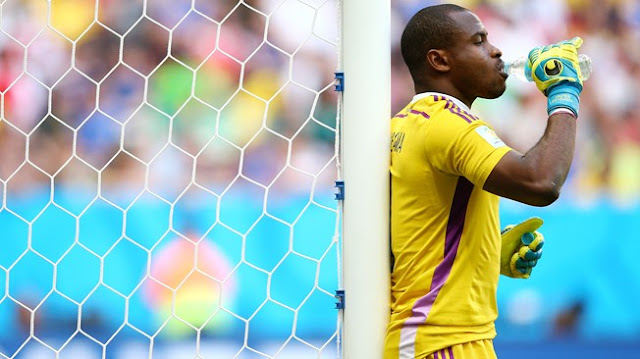 Vincent Enyeama, Nigeria Super Eagles' most capped footballer in history, has announced his retirement from international soccer. FIFA.com describes him as Nigerian legend. And rightly so.

Enyeama or Inem, as he is fondly called in Akwa Ibom, where he comes from, was born 29 August 1982. He began playing in the University of Uyo where he schooled, had a stint at Akwa United before moving on to Enyimba FC. He won the Nigerian Premier league 3 times and the CAF champions league 2 times with Enyimba.

After 3 seasons with Enyimba FC, he moved to Bnei Yehuda Tel Aviv in Israel, stopping over for one season at Heartland FC (then Iwuanyanwu Nationale). In his first season with Bnei Yehuda, the team qualified for the final of the Israel State Cup and reached fourth place in the Israeli Premier League, which qualified them for the 2006 UEFA Cup. And then Enyeama signed for Hapoel Tel Aviv, a minor club in Israel, in 2007.

With what was described as 'amazing physical and athletic skills', Enyeama single-handedly kept Hapoel from relegation and helped them reach state cup final. By 2008/2009 season, Hapoel almost won the league title with Enyeama winning the "Player of The Year" award though he was not an outfield player but a goalkeeper.

By the 2008/09 season, Hapoel, who were struggling to stay in the league before Enyeama arrived, almost won the league title.

After tremendous exploits in the Israeli league and in the UEFA champions league, he signed in 2011 for Lille OSC, with a debut against Inter Milan in a 2012 UEFA champions league group game - a game Inter fought hard to win 1-0 - returning to Israel on a one-year loan deal with Maccabi Tel Aviv. Replacing the first-choice goalie at Maccabi, he helped the team win the championship title.

He made his debut on 18 October 2011 against Inter Milan in the 2012 UEFA Champions League group stage, where Inter managed a 1–0 victory.

When he returned to Lille, he was an even worse goalkeeper to play against in Europe. Selected by his coach as first-choice keeper, he famously kept 11 consecutive clean sheets in Ligue 1 having played 1,062 minutes of football without conceding a single goal. It took a deflected strike from Landry N'Guemo in an away match against Bordeaux. He had come within 114 minutes of equaling Gaetan Huard's Ligue 1 goalkeeping record.

For Nigeria, Enyeama was selected for the 2002 FIFA World Cup to replace Ike Shorunmu in the last group game. He made his competitive debut in that tournament, keeping a clean sheet against an England squad that fielded superstars like Beckham, Campbell and others, in the last group stage match.

Since the retirement of Ike Shorunmu, Enyeama has been the first-choice goalkeeper for the the Super Eagles, helping the team to third-place finishes in the 2004, 2006, 2010 CAF Africa Cup of Nations tournaments, and captaining the team to victory in the 2013 edition. He also participated in the 2010 and 2014 FIFA World Cups, and the 2013 FIFA Confederations Cup.

In the 2006 Africa Cup of Nations, Enyeama stopped three kicks in the quarter-final penalty shootout against Tunisia, but could not prevent a loss to Côte d'Ivoire in the semi-final. In the 2010 tournament, he was again Nigeria's shootout hero at the quarter-final stage, saving from Zambia's Thomas Nyrienda and scoring the winning kick himself.

His name made its way into Lionel Messi's biography when he famously frustrated the World's best striker and player saving six of Argentina's best shots with four of them from Messi. He kept Messi from getting a badly needed goal and won the Man-of-the-match award along with special praise from Argentine coach Diego Maradona. In the next fixture against Greece, 'Inem' was again named Man-of-the-match.

By the time Enyeama and Messi met again in the next World cup, they exchanged pleasantries in memory of their last international encounter and then renewed hostilities, Messi firing-Enyeama saving. Eventually, Messi beat Enyeama to feel intense excitement. 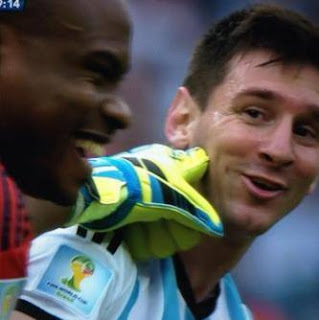 He played for the Nigerian national team from 2002 until October 2015, serving as captain from 2013 till retirement from international football.