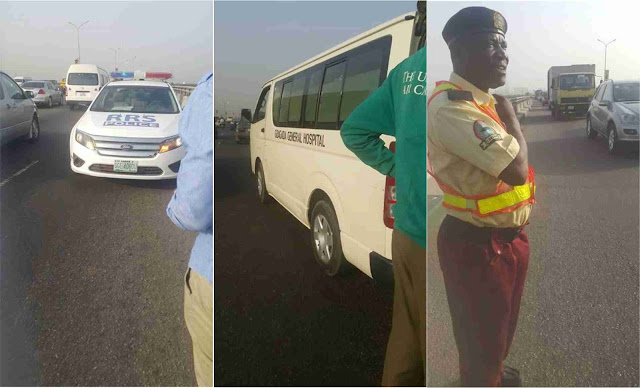 Officers of the Nigerian police, soldiers, one LASTMA(Lagos State Traffic Management Agency) officer, and an ambulance belonging to the Gbagada General hospital on Tuesday evening refused to help a dying man found on the 3rd mainland bridge in Lagos.

Although Nigerians are familiar with such unspeakable acts of nonchalance and disregard for life by members of the public service and security agencies, this particular incidence has given more publicity to the fate of helpless Nigerians in the care of heartless public officers - and drawn the ire of an increasing number of people on Social Media.

The testifier – who also supplied the photos – Ilsa Aida, a Lagos resident, on her way to church on Tuesday evening, stumbled on the motionless body of the unidentified man in the middle of the road – a highway. According to her, 4 Military men rode past on ‘Okada’ (motorcycle) and “Eeyaah”, they seemed to mutter in commiseration. Policemen drove past with blaring sirens, shaking their heads at the scene. The LASTMA official arrived on a motorcycle, stopped and made a phone call to his bosses - who told him "they were not coming”.

The next to arrive was a policeman in the vehicle recently donated to the force by the Lagos State Government, shown in the photo. He called his superiors over the phone and, according to Aida, they instructed him not to carry the helpless fellow with the ‘new’ car as it was not to be stained with blood.

What baffles the writer more would be the fact that this Police man had a vehicle(registration number GGE406DU) at his disposal, a brand new Ford bought with tax-payers’ money, for serving and saving public life. That begs the question as to whether the said policeman would not immediately be arrested for investigation into such lawlessness by officers of the law – at least a civil rights group should sue this man to send a wake-up-for-we-mean-business message to the Nigerian Police force, whose slogan, ironically, is ‘Police is your friend’.
An interesting extension to the tragic event:
“We eventually stopped the ambulance of the Gbagada General Hospital and the driver agreed to carry the man, ONLY if the police escorted him”.
And on going through the comments of people reacting to the narrative, it seems the law enforcement agencies are to blame even more. Below are some reactions;


There is need for our our laws to define some kind of process a passers-by or good samaritan can follow in the case of trying to help a an injured stranger where such a person does not end up a victim. Until this happens might be difficult to have more Nigerians take the risk. Thus is something we must push to book the National and state Assembly. God bless Nigeria and thank you llsa for your kind gesture.


People are very reluctant to help others in this situation. For instance, if you carry an accident victim to the hospital and the person dies on the way, you are automatically accused of murder by the police. Most times, the hospitals reject critical cases. We really need to have a good ‘Samaritan law’ that protects people.

Nonye Ojukwu:
My dear I have experienced same in Abuja. I ended in the police station for just trying to help someone.

Chukwunonso Nzekwe:
Two months ago, I was in a police station trying to report a case when a woman brought in a girl "lost but found". Next thing I saw was the police arresting her and accusing her of whatever. They asked her whether the police station is a charity home. They took the woman’s full details and made sure she dropped some money for the little girl’s upkeep. Nigeria is a serious joke. We don't care about each other including those that are paid to "protect the lives of citizens." This thing happened at Orile-Iganmu police station. You dared not utter a word because if u do, you will be thrown in a room and no one will see u for days.

Meantime, in a follow up to the event, it was reported by another person, Jerry Isichei, that the dying man was finally brought by an ambulance to the nearest hospital, the Gbagada General hospital, escorted by police men. The following transpired:

Jerry:
"I was at the Gbagada General Hospital casualty unit this evening when the hospital ambulance, accompanied by two policemen in one of these new police cars, brought in a young man wriggling in severe pain.
His hand appeared broken, his face battered. Some nurses and orderlies rushed to the ambulance and requested to see the man's people. When the police said they picked the man on the road, all the hospital staff just left the ambulance as quickly as they came.

Even when a doctor came out, he explained casually that without the man's relative they cannot do anything adding that they needed to be sure of who is picking up the bills. I simply could not believe my ears. This was coming from someone who is trained to save lives!

When I confronted him with this fact, he simply hissed and walked away. I took another look at the man in the ambulance; it was obvious his life was ebbing away fast. I couldn’t stand such brazen callousness any longer! I started screaming at them to do something to ensure the man does not die.
Other people who had family members in the casualty joined in the crusade. Someone eventually called the Medical Director. The MD, after making some calls, ordered his heartless staff to give the man First aid. I pray the young man survives this ordeal. Certainly, a Nigerian life has to have greater value."


This only goes to show the depth of decadence in the public sector – with much worse notoriety being the unprofessionalism and mercilessness of both medical practice and security operatives in Nigeria. And this post is in fact to give more publicity to the incidence and, if possible, provoke action against the scapegoats caught neglecting their work of saving life.