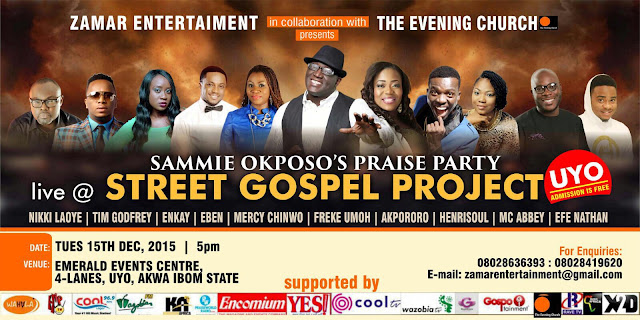 “The Street Gospel Project is basically a concert campaign that drives with content to reach out to people on the streets” says Pastor Runcie Mike, senior pastor of the innovation driven The Evening Church; and convener of the annual Street Gospel concert. The first edition, in 2014, held outdoors at the Ibom Tropicana Resorts. Street Gospel 2015, the sophomore edition is in collaboration with Zamar Entertainment, organizers of Sammie Okposo’s Praise Party - and fields A-list Nigerian international Gospel acts.

The concept of reaching out to people on the streets is born out of renewed understanding by the Christian church, especially since the second half of the 20th century, to keep evangelism in pace with a swift generation, so that the world is perpetually in touch with the gospel of Christ. It has kept an increasing number of Christian denominations reviewing their outreach approaches away from the conformist in search of more efficiency. The Street Gospel Project is an outreach model of the Evening Church, with other such projects of the ministry.

Sammie Okposo
Sammie Okposo, is arguably, the most metioned name in Nigeria's Music industry, from the Gospel sector. His name has dominated ratings, headlines and trends in Nigeria, Africa and globally. Year-in-year-out, he works assiduously to export Nigerian Gospel music to the rest of the World. On returning from a hugely successful world tour to Turkey, America, the United Kingdom and South Africa, he has been on the road to several Nigerian cities for Sammie Okposo's Praise Party. The Uyo edition is holding in partnership with the Evening Church's Street Gospel project.
His career has been laden with multiple awards including the Best Gospel Video Award at the 2014 Nigerian Music Video Awards (NMVA). He was once more crowned ‘Africa’s King of Gospel Music’ at the Crown Gospel Awards in 2014 and also won the Best African Gospel Artiste Award at the exquisite ceremony. Besides those accolades, the Glo Ambassador and UN Ambassador of Peace, also runs humanitarian campaigns to bring hope to 'undeserved Nigeria' through his project Sammie Okposo Hope Initiative (SOHI).

Freke Umoh
It amazes many that Uyo and Akwa Ibom are still cannot get over Freke's music after nearly a decade of dominating the scene. He can be considerd the biggest gospel music export of the last decade from the region, by all standards. Yet, everytime he returns home to feature in some event, he always seems to have the key to unlock the atmosphere - to the point where it appears Freke will never go out of fashion. And the story is the same everywhere he appears; whether at the Experience, at the yearly, famed Calabar carnival; at national events, to sing the national anthem; overseas in some concert and christian gathering, and countless international conferences providing music or playing host. This year, he had a very successful outing with a special highlight being his personal concert project tagged #NOW which saw the biggest hall in Uyo filled to capacity - for worship.

Nikki Laoye
2014 saw Oyenike Laoye Oturu's career explosion to the national stage. 'Only You' and '123' were her hit singles released that year. The urban contemporary Gospel artiste, dancer and multiple award winning song-writers, is one of Gospel music most sought after artistes, in and beyond Africa, in the gospel and mainstream sectors. Beyond her awards - the 2013 Hip Hop Awards Best Female Vocalist; Best Female African Artiste Award at the African Gospel Music Award; Best African Inspirational Artiste Award at the African Music Award (AFRIMA); Crystal Awards’ Best Worship Song award (for Only You) among others - Nikki is a passionate humanitarian, founder of Angel for Life Foundation and an ‘Ambassador’ of the National Commission for Refugees, Migrants and Internally Displaced Persons (NCFRM).

Akpororo
For those who followed the development of the Nigerian comedy entertainment subsector, Jephta 'Akpororo' Bowoto, has broken through 'all of a sudden', hijacking attention with his bold, blunt, animated, and ribcracking humor. He combines superlative mimicry talents, societal and gospel jokes to milk laughter tears out of even the most hardened listeners. It is plainly impossible to watch Akpororo and not laugh to tears. Ask the foreigners who attend the Expconce concerts, the world's biggest gospel concert, where he has been a regular since his debut in 2012. Simply put, Akpororo has gone on to become a household name in the entertainment industry - and signed a multimillion advert deal with Airtel Nigeria.

MC Abbey
Nigeria's Comedy Prof, Minister Abiodun Olopade known popularly by his sobriquet MC Abbey, will be on hand to heat up the concert with his anointing for humour. The A-rated comedy maestro who hit the top line with his popular and funny self-coined grammatical expressions, held a successful comedy and music show featuring 33 leading and promising acts in June this year.

Tim Godfrey
The multi-talented Nigerian singer, song writer, music producer and director known as Tim Godfrey became interested in music as a teenager. He then started his music career in 2004 as a music arranger, voice groomer and producer. Having launched out subsequently, Tim Godfrey and his group, the Xtreme Crew were one time reported to have performed in over 1000 events both within and outside Nigeria within the space of five (5) years; performing alongside Sammie Okposo, Sunny Neji, Folake Umosen in South Africa during the Kora Awards 2005, and in Ghana during the Ghana Music Awards 2006; and toured five (5) states in America in June 2006, going on inter-states tour with Nigerian best rated gospel Artistes organised by a UK based music company "SET HIM OFF MUSIC MINISTRIES" 2007. Tim’s hit single "AGIDIGBA" made waves in Nigeria, celebrated among top 10 music works at one time.

E-Ben
Born Emmanuel Benjamin, E-Ben started out as a rapper, coached by an elder brother of his; till he found out he could actually try out singing. From that point, he began to sing as a background vocal in studios. He once performed as a duo E-double, before coming out solo with his 2007 album ‘On The Rock’ featuring hit tracks like Imaramma, God dey, Iwo Nikan and others. He advanced with a burgeoning career, appearing on several coveted platforms in the country and establishing himself as the pioneer of a genre of music he refers to as ‘Afrocentric Rock’. By the time he released his church and street favourite ‘All The Way’, he had begun to explore the international scene. This hit track practically soared to the status of a praise classic; together with his earlier works fetching him accolades to include nominations for Best Male Artiste, Africa Gospel Music Awards UK; Best Gospel Video, Africa Music Video Awards; Best Male Artiste, National Gospel Awards Nigeria; winning the PBO awards, NGMA awards and others.

Mercy Chinwo
The 2012 Nigerian Idols produced a super-singer, the multi-talented PORT Harcourt born, Mercy Chinwo.   She took her time, however, to build her career singing in collaborations, live at events, and recording tracks – finally releasing a hit single last month, November 2015; the highly rated ‘Testimonies’. An interesting story of her history in music is the fact that she started singing as a child, but had to take it up as a career in 2007 when she lost her father and had to fend for her younger siblings; as the first child of her parents.

Efe Nathan
One of Nigeria’s most prolific singers and Music directors, Efe has worked with so many artistes, church worship teams and choirs. She believes that Worship is the very heartbeat of God and therefore maintains her passion to teach the church and the world outside how to attain a deeper dimension of worship.  Many who have sat under her ministry consider her music as Contemporary African Music (CONTAF), and believe that her music easily brings about an Atmosphere of Worship and healing.

Henrisoul
Henrisoul is an Award winning singer, Song writer and eccentric Performer. Born Ifeanyi Henry Orji, he was widely reported to be the first alternative gospel artiste in Africa to have a video on BET’s 106 & Countdown and that was the video of his song “Blow My Mind’. He has not only written amazing songs, but has paid attention to achieving great feats with his videos, working with the prolific Clarence Peters on projects that attract him nominations automatically.

Enkay
Nkiruka ‘Enkay’ Ogboruche from Abia State is the only female vocalist in the award winning Gospel group the Tehila Crew and is a worship leader at the famed RCCG City of David parish in Lagos. When she released her debut single titled ‘Yes! You are the Lord’, an upbeat worship song, she announced herself as an artiste to look out for. She has since followed that release with others, collaborating with well-known names in the Gospel music sub-sector.