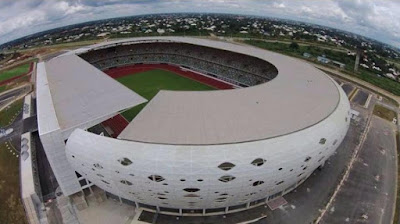 The Akwa Ibom state Government has concluded plans to engage a high caliber football club in Germany to set up and manage a Sports Academy at the Godswill Akpabio International Stadium before the end of 2016.
The state commissioner for Special Duties, Engr. Etido Inyang who disclosed this in an interactive session with online media practitioners in his office on Thursday January 7, hinted that talks are already ongoing with the English Emirates Premier League to create a Sport Academy and invest in kids under ten in the state, that would spring up to become international soccer stars to recon with in the near future.
The commissioner however explained that the sports facility was not built only for football or for short term revenue, saying that the idea behind the edifice of such magnitude was to create wealth for the state in the long term.
“For example; if you take a ten year old, and start to train, create an academy; I told you how passionate the Governor is and that he said toJulius Berger; "I want you to give me one of the clubs in Germany that would come to take up the management, create an academy of sports". We are equally looking at the premier league. Remember that the Emirates came in there some time ago.
“We won’t even have the face to talk to Emirates if you don’t have a good stadium. We might succeed this year, but I don’t see us missing next year. We will invest in our talented kids who would spring up to become the Ighalos; although it would not be Ighalo this time but the Udos and Akpans that will over run all the other players in Nigeria. That is for me what the investment is all about”. He explained.
On the commercial management aspect of the stadium, the commissioner said the state is strongly shopping for a good management team which will come up with options for revenue generation and training programmes.
“We are looking at a situation where someone is coming up with an option of say; creating a club around the stadium and then you pay dues and make recommendations of these young ones for the Academy. So the team that is coming in comes in with finance and then is not running it alone but creates a community where you have these young people to train up”. He proposed.
Engr Inyang also mentioned that the state would welcome private partners who are ready to take up the completion of the second phase of the facility, which will include indoor game facilities, volley ball pitch, swimming pools among others; saying that the idea of the facility was a sport village and not just a football pitch.
He expressed optimism that when completed, the Ibom International Stadium will generate good revenue for the state not only physical money, but also it will bring up our highly gifted children in the sports world.
Udeme Utip
Edited by Uduak Umo
How Enyeama Became Nigerian Legend
The Next Footballing 'Essien' of Africa
Europe FIFA Football Soccer Sports