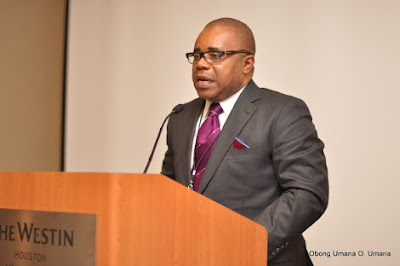 Incriminating details have emerged concerning Mr Umana Okon Umana’s long mysterious source of wealth, for which his boisterous spokespersons have sadly kept a tight-lip on, and it is a long suspected multi million dollar heist of public funds. These revelations will certainly warrant a response from standard bearer of the APC in Akwa Ibom state and former commissioner for Finance and Secretary of the State Government.
It has already been a much talked about topic the mystery of Mr Umana’s wealth. He is said to have bought over the APC in Akwa Ibom and became their flag bearer after being a member in the party for just 11 days; which led to his long-running battle with Senator John Udoedeghe, the de facto political leader of the party and founding father.
His ability to single-handedly bankroll the fiery resurgence of APC campaigns in Akwa Ibom has only gone to baffle people. Scuttlebutt has it that the former SSG, who is popularly believed to have become generous as he began to hint at his governorship ambition, hands out neat Naira notes folded in All States Trust Bank cash wraps. That bank had disappeared over 10 years ago, but this politician seems to be in custody of their vault, from discussions with firsthand beneficiaries of his largesse.
These, however, are mere hear-say compared to latest revelations brought forth by a media consultant who, along with Mr Umana, had worked in previous administrations, Mr Emmanuel Nicholas.
In a release titled “If Umana Is A Saint, Who Is The Corrupt”, Mr Nicholas, presently a Media Aide to Governor Udom Emmanuel, writes in reaction to recent reports of Mr Umana’s publicly promising to probe the immediate past administration of Senator Godswill Akpabio, one in which he served for 7 years. He bares the records in the 18 paragraph open letter constructed to demystify the puzzle of Umana’s wealth.
Justice has also been done to popular belief by Akwa Ibom Civil Servants that Mr Umana ‘defrauded’ them, with Mr Emmanuel fingering Umana’s inlaw;
“Please tell Akwa Ibom people what happened to the contributory funds of the State Civil Servants at First Bank of Nigeria, which when the then incumbent Governor ordered the bank to refund to the owners, the bank report showed that you had earlier ordered for the money to be transferred to a certain personal account that was later discovered to belong to your wife’s sister, as the name ended with Ubiam.”
The electrifying write-up further reinforces hush-hush beliefs that Mr Umana used AEC Works to drain off millions from government coffers via the Finance and General Purposes Committee which was headed by him. It also gives indicting details to demystify the fog surrounding the sales of the Akwa Ibom State shares in Econet Wireless; the Ibom Airport construction and Science Park contract sagas. And Mr Umana Umana is blamed to be complicit in all.
“…sir, it appears there is no trace by successive government as to how much the shares were sold for and where the money is. When His Excellency Obong Victor Attah was interviewed recently, he said the record of that transaction was kept under your ‘honest’ watch.”
A report by a House of Assembly’s public hearing is probably the most implicating, cited in the write-up;
“According to the House of Assembly public hearing resolution, Engr Frank Okon indicted the then Commissioner for Finance for not releasing the entire funds to his firm. Sir, the records show that you were that commissioner for finance. The Documents from your office as commissioner of Finance shows you paid $5,700,000 ; but the contracting firm says you only remitted to them $1,300,000.”
Mr. Nicholas adds a little twist of Sarcasm as if to explain Mr. Umana’s aggressive intention to govern Akwa Ibom State with ridicule;
“I know ‘these new guys’ are not experienced enough to know where you kept that money but if they allow you go in yourself, you will bring it out. Isn't it so? That's why they should vote you in as Governor. If we wait till 2023, someone else may find that money and we will be finished.”
With Mr. Umana’s campaign stepping up against the administration of Mr Udom Emmanuel and the PDP in Akwa Ibom state and drawing proportionate rejoinders, further reactions seem to promise the discharge of more incriminating records from his time in Government.  One may begin to wonder what more is to be expected.