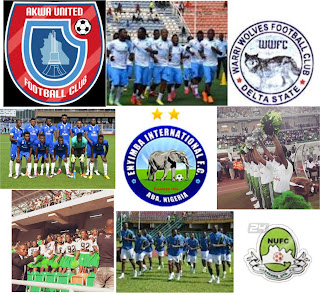 The 2nd leg of the Glo Premier League Super Four Competition kicks off today, February 1, 2016 at the Godswill Akpabio International Stadium, the Nest of Champions. Akwa United will take on Warri Wolves while Nassarawa United will challenge Enyimba FC later on the same day.

Contrary to a information posted on the NFF website before the first fixtures, that announced the games for 2pm and 7pm, it has been confirmed that the games will hold by 5pm and 7pm.

The League Management Company (LMC) organise a mini-tournament for the top four teams of the Nigeria Professional Football League (NPFL) and another for the Nigeria National League (NNL). This is the Super Four tournament.

The NPFL is the highest professional football league in Nigeria, that was once called NFF. It was ranked Number 1 in Africa in 2012, and 24th in the World - ahead of the Scottish Football league. It is fed by the immediate lower league, the Nigeria National League (NNL).

According to www.thenff.com, "The LMC is organising the two rounds of the Super 4 this season to provide the four teams representing the country in continental club competitions sufficient competitive games to gain match fitness before their respective international fixtures commencing on the weekend of February 12-14"

The Next Soccer Essien of Africa, after Michael Essien