Have you ever seen Lorries vigorously move fine sand to and fro various locations in Akwa Ibom State? Well, a good number of them are guilty of illegal sand mining and are destroying our environment for us. While some excavate from river beds with metal buckets, their traditional tools, some have since employed advanced technology thereby enhancing their trade of degrading our natural environment. Investigations reveal that the owners of the dredging plants are non indigenes of Akwa Ibom who bribed community leaders with ‘Kaikai’, goat meat and peanuts.

While sand mining is not in itself an illegal activity, there are licensed locations where the activity may occur. Besides, it is strictly monitored to ensure that it does not damage the environment. This is not only the case in Akwa Ibom as confirmed by the Ministries of Environment and that of Works; it is standard practice all over the world, otherwise, there would be widespread cases of severe environmental degradation.
In most other parts of the World, dredging has beneficial purposes like land reclamation, creation of new harbours and navigable waterways, beach nourishment, removing trash, recovering bodies of murder or suicide victims, harvesting of economic resources like precious metals and others. In Akwa Ibom, it is primarily for sourcing materials for construction.

In Lagos, for example, dredging plays a part in the ongoing artificial peninsula project Eko Atlantic. The system employed in this case is similar to that used in the construction of the Dubai artificial islands.
When the Ibom deep seaport project, now Ibom Industrial city, is ready for kick-off, it is most likely that some dredging work will need to be done to enable vessels navigate into waterways designed into the project.
These show you how essential the activity of sand mining or dredging is to the development of any economy. But, it also comes with its negative impacts.

Impacts of Dredging
Firstly, dredging tampers with the soil structure and can lead to the release of trapped toxic chemical bringing about disturbances to the ecosystem.
It can also lead to the release of the toxic compound Tribultin, commonly used on mechanical equipment as anti-fouling paints and banned in developed countries since 2008, into the water. The effects of the ensuing contamination reach as far as domestic life near locations of impact and beyond.
A particularly troubling impact of this activity on the environment is in the alteration of topographies thereby worsening risks of gully erosions. This is common in Akwa Ibom State.
Perhaps the most frightening effect of illegal sand mining in Akwa Ibom was captured by the State Commisioner for Works, Mr Ephraim Inyang-Eyen in a parley with journalists recently;

“I am giving one-week grace for owners of barges to remove all the dredgers they brought to destroy our environment. As we sit today, we cannot build a bridge at Ekpene Ukpa, we cannot build a bridge at Mkpok; because the entire surface that should hold the bridge has been taken out. Now if you remove the clay, you remove the entire sand that is supposed to hold the column. When you put the column, it floats.  Some of these things are damaging our environment. If those things are allowed to continue, our generations, our children will not have where to call their own”. 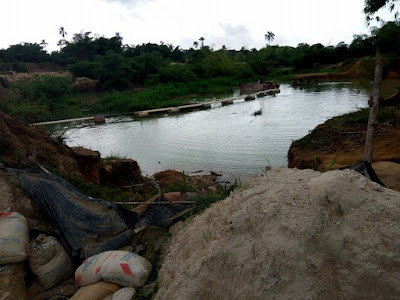 Government Action
The above statement leaves one shuddering at the possibility that some bridges in Akwa Ibom could collapse under commuters’ weights - because they are being supported underneath by a fluid underwater soil structure destabilized by illegal mining activities.

In the interview, the Commissioner had also affirmed that most of the dredging barges are owned by non-indigenes of Akwa Ibom, mainly from South Eastern states where government restrictions on sand mining are on the increase, due to well-documented incidences of gully erosion caused by man-made factors.
“Believe me; the owners are from neighboring states. Because they cannot do it in Abia, Imo and Anambra states, they just brought those things to come and destroy our environment. And unfortunately, from my findings, they deceived our elders, gave them goats, gave them hot drinks and kola nuts and a little money. And they surrendered…” He revealed.


And then he sent one more tough message to the defaulters;

“Those who own those dredgers should be ready because any moment from now, we’ll go for them and anyone impounded will pay 5 million naira. I have said it before. When I impound it, I lock it up and you cannot take it out. You will go to Ministry of Finance or sub treasury, pay, bring the receipt. We then unlock, and you move the dredger that day.
Now that we are announcing, they’re not hearing. You know, people like to dare government; they believe government cannot do anything.”

The act has been criminalized and communicated to all involved, according to Mr Inyang-Eyen, yet some of them are still defiant. In places like the Etim Ekpo River, there is a dredger still actively removing sand from the river bed even when there is a recently built bridge there. What is the future of that bridge, if one may ask?
Now, more recently, in bid to carry out Government’s resolve to arrest the situation, the  Commissioner for Works; that of the Ministry of Environment, Dr. Iniobong Essien and the Commissioner for Information, Mr Aniekan Umanah embarked on a tour to sites of illegal dredging in the state. The tour is a demonstration of the State Government’s resolve to solve this problem once and for all.

Elders in our communities, salivating for measly kola nuts, ‘kaikai’ (local gin) and cheap goat meat had erred gravely in handing over our God-blessed natural habitats to these people to exploit. If we do not all lend our voice in support of State Government efforts to recover what is left from their shylock hands, they will sink us and they will move on.