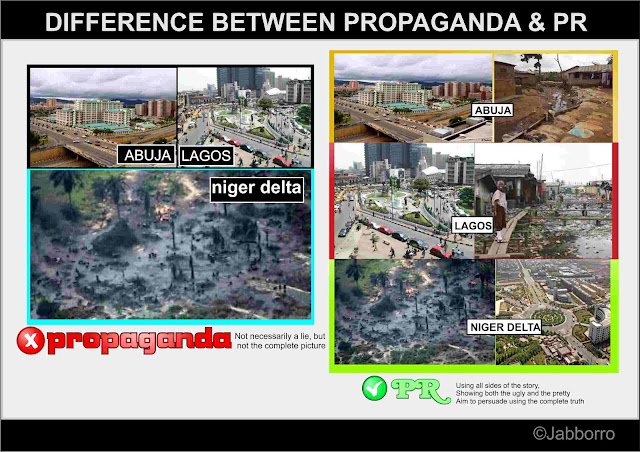 
A basic definition of Propaganda is the systematic manipulation of public opinion, distinguished from other forms of communication in that it is consciously and deliberately used to influence group attitudes by imposing the opinion of the propagandists on their target. Its methods are also different from PR and other forms of communication. The Gonzales Weekly, an American publishing firm, points to one method used on the American public: the Half-Truth.
When it comes to principles of transparency and accountability by leaders to the masses, or Organisational leaders to their stakeholders, however, half-truths are whole lies.
On the PR hand, truth must be told in its complete form. When an organisation has crises, for instance, the first step to solve it using PR, having assessed the situation, is to advise top Management on what step to take. Next step is to reach out to affected stakeholders with transparency. The PR manager or consultant will seek to persuade aggrieved parties to maintain the relationship, communicating factual information. Having arranged on an appropriate course of action with Management, his communication will not need to contain falsehood.

Nancy Snow (PhD) writes;
"Truth is not the absence of propaganda; propaganda thrives in presenting different kinds of truth, including half truths, incomplete truths, limited truths, out of context truths. Modern propaganda is most effective when it presents information as accurately as possible."
In the case of the Niger Delta, the Government of Nigeria may deploy Propaganda by repeatedly emphasizing the developed parts of the region and all they've achieved via the interventionist commission NDDC, aiming to discredit the argument of the Niger Deltans.

The Niger Delta agitators, on their part, may deploy propaganda using pictures to show the glories of Abuja and Lagos and the ruins of the Niger Delta whose natural wealth has built those cities, attempting to tell the world that there's nothing good left in the oil producing region, while there's everything good about the capitals of Nigeria.
While it is true that the wealth of Nigeria has been controlled by a Federal Government that has only had headquarters in Lagos and Abuja; the propagandist picture does not tell the whole story. Billions of Dollars since oil exploration began in Nigeria have been invested in the region through empowerments, infrastructure, contracts to natives, jobs and skill development trainings. But, of course, much more could have been done. The worst mistake of the Nigerian government - in my opinion - was the execution of Ken Sarowiwa, an erudite, outspoken and charismatic Ogoni who peacefully demanded the cleanup of Ogoni land having been devastated by the drilling activities of Shell Petroleum. General Abacha, who ordered his execution, is long dead; but that error now costs Nigeria far more than if past Government administrations had heeded Sarowiwa's call.

If there were a true PR Manager in the Federal Government, they would carry out extensive situation analysis, recommend certain actions to the nations topmost leaders, and then manage the actual deployment of those recommended communication steps. Then they will evaluate their success. These 4 parts are by no means the only. They can be spread thin to bring out other steps and tactics. They would work miracles for Nigeria if implemented efficiently.

ADDM: Here are 5 Differences between Propaganda and Public Relations

1 - Propaganda is not so much designed to change opinions so much as reinforce existing opinions, prejudices, attitudes. PR informs, educates and enlightens people with knowledge they never previously had. It aims to change/shape public opinion through persuasion with ethics.
2 - Education is not necessarily the best protection against propaganda. Intellectuals and "the educated" are the most vulnerable to propaganda campaigns because they (1) tend to absorb the most information (including secondhand information, hearsay, rumors, and unverifiable information); (2) are compelled to have an opinion on matters of the day and thus expose themselves more to others' opinions and propaganda campaigns; and (3) consider themselves above the influence of propaganda, thereby making themselves more susceptible to propaganda. Education or the lack of it affects the approach of PR campaigns. PR depends on Research, and mass illiteracy is a setback to accessing research resources.
3 - Propaganda seeks to modify public opinion, particularly to make people conform to the point of view of the propagandist. In this respect, any propaganda is a form of manipulation, to adapt an individual to a particular activity. PR strictly pursues building mutually beneficial relationships. It utilizes the two-way symmetric model of communication, where the opinion of the target audience is taken into consideration when making policies that affect them.
4 - Modern forms of communication, including mass media, are easy instruments of propaganda. For propaganda to thrive, the media must remain concentrated, news agencies and services must be limited, the press must be under central command, and radio, film, and television monopolies must pervade. PR makes use of all possible, all available, all affordable media channels.

Dr Nancy Snow's notes have been used in this post.