- June 01, 2020
Pam Windsor, an entertainment contributor at Forbes recently wrote about Sinach's 'Way Maker' under the caption; "Michael Smith's 'Waymaker' becomes go-to comfort song in a global pandemic". Nigerians - at least the ones who follow gospel music - are hard on Forbes. A notable name amongst the unhappy reactions is Victor Oladokun. He is a world renown media personality also known ofr his Christian faith and dual-racial background. 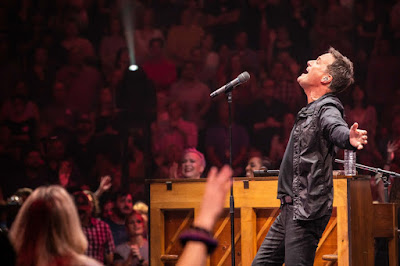 I thought to weigh in on this angst because I am equally of the gospel background, although a practicing comms professional.

We should not take offense at the heading of the Forbes article. That is clearly work of Michael W Smith's tremendous PR strategy team.

His marketing team obviously do not list Nigeria and Nigerians among their market targets. This is why their captioning doesn't name Sinach or anyone else as author of the song. But in the body itself, credit is duly given.

And for some reason, Michael Smith hasn't featured in Nigeria - one key 21st century stopover for the universe's lead worshipers.

How Far 'Way Maker' Has Gone

Now, with 'Way Maker', Sinach has written the earth's most watched, most played Gospel song of this century. While the Forbes article commended Michael Smith for more than 19 million views on YouTube, it did not realize that Sinach's original version (which, by the way, was shot beside a river in my hometown of Uyo), had garnered more than 150M views in 4 years. She has had more than 16M views in 3 years on a live video of the same song.

- Leeland's version of the song has had 27M views in 9 months.

- Stephany Gretzinger had 20M in 4 months.

What Sinach has done by writing this one song has pushed the Nigerian gospel music brand farther than any other region has gone in recent years.

Heaven must be at a standstill for Sinach every time for this master-piece of a worship song.


The 'World' Jesus Longs For

But where it matters most amongst earth's distribution of consumption neighborhoods, Sinach is not as recognized. It will take serial, several, consistent, deliberate professional PR effort to break that barrier for her and many other gospel leaders following.

I am talking about the business world, the secular music fan bases of the world, the pools of agnostics in important places, the actual 'world' Jesus longs to reach.

But Sinach has done a lot. No other christian artiste from Africa has gone as far as she has in this decade and the last.

But even if you can't reach everywhere, being featured on a global business portal with high authority like Forbes, is a worthwhile pursuit.

This is what the likes of Michael Smith have firmly in grasp. These people know what 'media relations' and 'media buying' (for example) are and why they need their mom, Public Relations. Isn't that why their marketing teams could secure the support of mainstream media writers and editors at will?

If you're a gospel music leader and you do not understand the modest but most powerful marketing variable called Public Relations, that is the reason you simply cannot 'go into the world' and command attention deep in there. Being African is not the reason for our typical results.

This too is why our own songs fly easily when foreign artistes replay them.

Notice that when we do 'go into the world' with usual evangelism methods, we always return with familiar harvest - the already church-ed whom we found outside or even in other churches. This is in almost all evangelism cases, putting it modestly.

Who will fetch the Easterners?
How about core academia?
When will we bring in Forbes' audience?

Anybody recall the names Ravi Zacharias? This man - God bless his soul - knew how to command the attention of the starkest unbeliever even as a man of God and engage them intellectually. It is possible! We can reach the deepest parts of skeptic earth with the music of the gospel.

And we can do this with proficient Public Relations strategies.

I am open to debate this topic however. Feel free to drop your argument in the comment section.

Uduak Umo is a Public Relations specialist, based in Uyo and Lagos, Nigeria.

PS
PR is not branding. Y'all are graphic artistes these days.
PR is not 'spinning'; crafting spins is common now.
If you don't know what PR is, then don't hire a professional. How else to put it?
gospel music Nigeria Opinion Public Relations