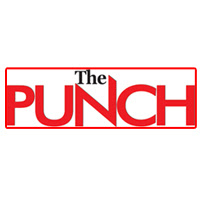 On Saturday, August 15, 2015, a friend drew my attention to a report on The Punch website. The subject was on sex in government houses. I began to read the report which was presented as an investigation piece. It was titled, "How governors turn govt houses to sex havens''. (http://www.punchng.com/feature/super-saturday-feature/how-governors-turn-govt-houses-to-sex-havens/)

I thought I was going to read the "juicy details" of sex in high places, only to discover that the article was filled with stories that cannot be substantiated. Frankly, those stories and, versions of them, have been circulating for decades in beer palours and the proverbial water cooler of offices. I was disappointed in The Punch.


Having worked as a broadcaster for 25 years, I don't expect a newspaper like The Punch to reduce itself to the level of blogging, where anything seems to go these days. But, here we are with a supposedly respected newspaper putting out stories that could pass for that on a gossip blog.

Sensational journalism is mainly a strategy for increasing the reading audience of a media firm in a bid to boost advert income. And it typically makes use of trivial information, exaggerations, euphemized blasphemy, controversies and yellow reporting.

Disappointingly, the Punch have carried it even further with their disdainful feature of on government houses. The article easily classifies itself as yellow press – the reviled practice of unprofessional, unethical and defamatory journalism.

Firstly, it is easy to see the weightlessness of their effort at reporting the story.

As one commenter remarked, they seem to want to harness the gullibility of some members of the public with poor research; “anonymity this", "our correspondent that…”. He correctly advised that a professional media service like The Punch should be able to come up with sensible information – especially for a practice which the writers claim is widespread. Research is everything in investigative journalism. Without it, the attempt is suspicious.

Secondly, the report which is headlined "How Governors...", and whereas the leading paragraph stated that “many government houses” were implicated, one would think that it would report on the 36 government houses, or at least 60%. But it only mentions eight states, of Nigeria's 36.


Of these eight states, six are PDP governed and the other two APC, of which one of the two is immediately exonerated. More interestingly, all but one – the same exonerated one – are Niger Delta States. This marks the reportage as partisan, with colorations of supremacist propaganda. And this is in spite of their flaccid attempt to demonstrate the objectivity balance.

Any well meaning Nigerian on the street is aware that Akwa Ibom governments have concerned themselves with long standing issues of negligence and inattention towards the development of Akwa Ibom extending to the sub-region. The praiseworthy campaign of Uncommon Transformation by Chief Godswill Akpabio is a case in focus.

Common sense would tell readers of The Punch that such lofty pursuits by that administration wouldn’t have left the time for immoral frivolities as the limp write-up alleges. Akpabio and his team are known to have placed emphasis on nurturing families while carrying out mind-blowing activities of governance resulting in developmental renaissance such as Nigeria has never seen. And they are well-known for having healthy marriages and families. Senator Akpabio for example, is famous for his respect for his wife and family.

In this light, the allegations by the nameless Punch writers, is nothing but malicious and disrespectful to nobility – for whatever gain. And that must be condemned by all right thinking members of the public.

Punch has, for a long time been considered objective media publishers; but, lately, the proliferation of sensationalism in the media practice, encouraged by heavy funding from opposition parties in recent past administrations, seems to have welled up to their neck, about to swallow them up. With two thoughtless publications – one widely condemned advertorial on January 19, 2015; and then this – it seems their reputation of ethical practice is flattening. 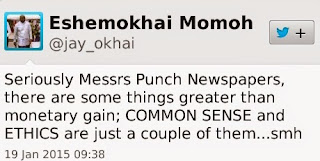 In the spirit of empathy, let it be assumed that The Punch's struggle amidst competition is driving them to lower their standards, making them employ a variety of tactics to help improve their standing. Whichever way, never will there be any justification for spreading untruths, and misleading information targeted at popular figures of the society in order to draw attention your way – it is not just cheap but sleazy, desperate journalism.

With contribution from Ernest Andem, Benin City, a broadcast journalist with over 25 years experience in Tv and radio. He is also a lawyer by training.