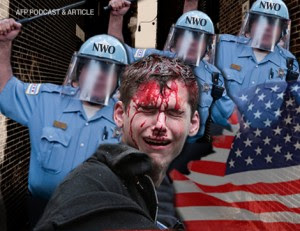 A young Muslim American couple, living the good life, husband earning nearly $6000 per month, enjoying a dream work environment and not known to have been in any altercations; suddenly storm a Christmas party at husband’s office armed for war. They gun down 14 and injure 21 leaving bombs planted everywhere to blow up expected multitude of first rescuers and survivors. Then they engage the police in a fierce gun battle ending up killed. All signs point to religious extremism, but America’s leaders tend to drag feet to conclusions. If this is not a terrorist act, it must be a flamboyant version of America’s new way to die: ‘Suicide by a cop’.

The concept, according to an ex-convict, speaking to a CBN TV interviewer on Friday December 4th, has become fashionable to some disoriented suicidal Americans. And why not, seeing the popular rise in American police brutality? Even though Tashfeen Malik and Syed Farook were not disoriented, they definitely were suicidal – and in a way radical Islam extols.

Between January 1 and May 31, 2015, 464 civilians were killed by police, with 102 unarmed, per The Guardian. By December 2, 1046 civilians had either been shot, killed by a Taser, hit by police vehicles or killed in detention; by the police. Compared to other democracies, the numbers reveal an even more horrific situation:

-          Iceland. There has been just one fatal shooting by Icelandic police in the country’s 71-year history. The city of Stockton in California – with 25,000 fewer residents than all of Iceland combined – had three fatal encounters in the first five months of 2015.

-          Germany. Police in the US have shot and killed more people – in every week this year – than are reportedly shot and killed by German police in an entire year.

-          Austalia. Police in the US fatally shot more people in one month this year than police in Australia officially reported during a span of 19 years.

-          Canada. Police in Canada average 25 fatal shooting a year. In California, a state just 10% more populous than Canada, police in 2015 have fatally shot nearly three times as many people in just five months.

-          Finland. Police fired 17 bullets at Antonio Zambrano-Montes, who was “armed” with a rock. That’s nearly three times what police in Finland are reported to have fired during all of 2013.
(The Guardian):

California already has strict gun control laws, yet these guys, the police have discovered, had an armoury and what looks like a bomb making factory back home. Why then would President Obama choose to stress need for more gun control in his first response to the San Bernardino attacks rather than zero in on the apparent, to save time? At time of writing this, more than 24 hours after more concrete facts emerged; American law enforcement announced that “Search for motive is on-going”.  Unnecessary flummoxing, but self-inflicted. They are shy to acknowledge that these were Muslim extremists in a Jihad against ‘infidels’ in no less a place of consequence than on ‘Infidel soil’ and in a Christmas party – a gathering of infidels.

And since the Obama administration, along with the Democrat presidential hopefuls insist on keeping all explanations for motive on the table – inclusive of such a laughable contemplation as ‘Work-place violence’, they better keep this in that lot as well – the trend of ‘Suicide by a cop’. Maybe Farook and Malik, chewing over the idea of suicide, chose popular American police bullets for suicide pills, with a more grandiose drama to surround it. Absurd, but ‘on the table’.